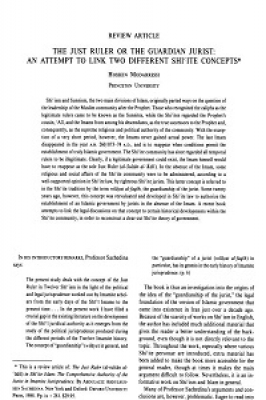 The Just Ruler or the Guardian Jurist: An Attempt to Link Two Different Shiʿite Concepts

Shiʿism and Sunnism, the two main divisions of Islam, originally parted ways on the question of the leadership of the Muslim community after the Prophet. Those who recognized the caliphs as the legitimate rulers came to be known as the Sunnites, while the Shiʿites regarded the Prophet's cousin, ʿAlī, and the Imams from among his descendants, as the true successors to the Prophet and, consequently, as the supreme religious and political authority of the community. With the exception of a very short period, however, the Imams never gained actual power. The last Imam disappeared in the year A. H. 260/873-74 A. D., and is to reappear when conditions permit the establishment of truly Islamic government. The Shiʿite community has since regarded all temporal rulers to be illegitimate. Clearly, if a legitimate government could exist, the Imam himself would have to reappear as the sole Just Ruler (al-Sulṭān al-ʿĀdil). In the absence of the Imam, some religious and social affairs of the Shiʿite community were to be administered, according to a well-supported opinion in Shiʿite law, by righteous Shiʿite jurists. This latter concept is referred to in the Shiʿite tradition by the term wilāyat al-faqīh, the guardianship of the jurist. Some twenty years ago, however, this concept was reevaluated and developed in Shiʿite law to authorize the establishment of an Islamic government by jurists in the absence of the Imam. A recent book attempts to link the legal discussions on that concept to certain historical developments within the Shiʿite community, in order to reconstruct a clear-cut Shiʿite theory of government. 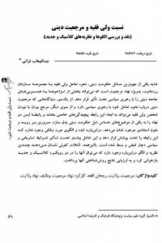 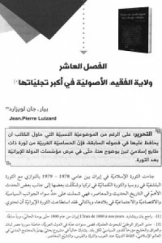